What We Learned from Prime Day: Apply to Your Holiday Strategy 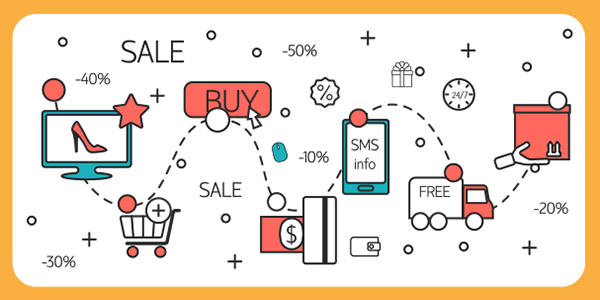 Get creative to improve your customer visit and increase sales numbers.

Unless you’ve been living under a rock, you’ve likely heard of one of the most anticipated shopping days of the year: Amazon Prime Day.

Prime day started in 2015 as a one-day event and in recent years has come to offer shoppers a multi-day experience. This year’s Prime Day was a 48-hour long event and brought in around 7.16 billion dollars in sales -- making it a pretty big deal.

Each year, Prime Day has continued to produce more sales than the previous. From 2018 to 2019 alone sales jumped from 4.19 billion to 7.16 billion. That’s a huge increase in sales from one year to the next.

Other Online Retailers Take a Stab at Prime Day

Many retailers, like Walmart, Forever21, Bloomingdale's and Macy's, are starting to beef up the competition with their own sales. By running their own sales during the same time as Prime, retailers are hoping to take some of those sales away from Amazon and increase their own sales results.

For the last few years, Walmart has been adding competition to Amazon on Prime Day. From offering quick shipping, special Google product promotions, and extending their shopping days, they’ve put up a pretty good fight.

Tapping into the voice recognition sales by teaming up with Google likely yields positive results seeing as Amazon sells three times as many Echo-family devices during Prime Day.
Let’s take a look at how some of these companies have promoted their sales over the last few years to compete with Amazon.

In 2017, Walmart promoted their free 2-day shipping promotion and made sure people knew about it. This screenshot shows what users saw when they searched Walmart in Google -- a big advertisement promoting their free shipping.

This example shows how Walmart had a heavy emphasis on promoting Google products to directly compete with Amazon. Seeing as these types of electronics tend to be a crowd-pleaser during these sales, it made sense to put the spotlight on the products.

While Walmart took a direct punch at Amazon, other retailers joined in on the fun in a little less direct way. For example, Forever 21 and Macy's took a different approach with "Black Friday in July" promotions:

In past years, Forever 21 promoted their Black Friday in July sale on their website banners to let shoppers know what the sales are as they are looking through items.

Macy’s took the same approach with the Black Friday in July and sent out an email with a wide range of product options and an extra 25% off deal.

And Bloomingdale's offered a 25% off online only discount on top of discounted items:

Of course, we can’t forget about the email marketing tactics we see during the Prime Day rush. Everyone’s trying to make the push to get customers to shop from their store rather than their competitors.

Retailers get were really creative with emails during this time of year yesterday, using everything from "Prime Day to Save" subject lines to this example from 80sTees:

Beginning at 11:00 AM ET, the retailer offered a two-hour only deal of 60% off select items:

Playing off of the prime phrase, this retailer promoted “Optimus Prime Day” with deep discounts on products. Clearly meant to play fun and compete with Amazon’s shopping event, they did a great job at getting the deals out there and creating some urgency around them.

Then, things got even better for shoppers, because Aat 1:00 ET, the savings went up to 65%

Trying to bring more shoppers to their site, they continued to increase the discount for shoppers.

And every two hours, a bigger discount was offered.

The items included in each two-hour sale block differed. It's a really creative way to keep customers engaged and shopping all day - and a tactic you can implement for your Black Friday or Cyber Monday deals.

Other retailers, like Tanga, have expanded its discounts from a single day to an entire week. This tactic allowed shoppers to keep the discounts flowing well before or after Prime Day happened. This example from Tanga is a few years older, but we’ve seen many other retailers take this same approach. :

When Tanga ran their Prime day promotions they chose to extend it for an entire week and provide discount codes and free shipping on products. This gave their shoppers a little more time to purchase than what Amazon had to offer.

In addition to the extended shopping time and discounts, Iit checked Amazon's prices regularly and dropped its prices even lower. By beating the prices that Amazon was promoting, Tanga hoped to bring in even more sales and take visitors away from the Prime website.

No Discounts? No Problem

Discounting isn't the only way to get in on the Prime Day fun. Many retailers, such as Waterford and Vineyard Vines, offered free shipping as a way to engage and reward shoppers. Although it may not seem like a huge deal, these sites don’t always offer discounts and this is one way they enticed shoppers to purchase with them.

Waterford put its feet in the Prime Day competition by promoting free shipping as a one-day-only sale.

Vineyard Vines used the same idea as Waterford by offering customers free shipping on any order -- no limitation on the purchase amount.

Giving Customers What They Want

Since its inception three years ago, Prime Day has become the online shopping event of the summer, and retailers can take advantage of the hype and excitement it brings. And there are a few lessons to learn. The biggest one is to give your customers options onin how and when they shop.

As a way to get creative, Amazon has provided customers who order through their Echo device extra sales that not everyone could get simply by logging on to Amazon.com.

It also offered customers mobile alerts for items before they went on sale - and an easy way for shoppers to add them to wishlists.

If customers were waiting for a specific item to go on sale, this was a great way from them to stay ahead of the sales.

These marketing tactics don’t have to only apply to Prime Day. In fact, they can be used throughout the year but especially during the holiday season when shoppers are plentiful and the competition is tough.

So take some tips from the companies doing it best and start getting your creative juices flowing to make your shopping experience standout.